IGES and The Energy and Resources Institute (TERI) organised a dissemination workshop on 18 December 2018 to promote the implementation of energy efficient technologies. The workshop was held at Vapi in the State of Gujarat in India as part of the activities under the Japan-India Technology Matchmaking Platform (JITMAP). JITMAP is a business matchmaking platform for low-carbon technology transfer from Japan to India, whose operation is supported by the Ministry of the Environment, Japan. Vapi is a prominent industrial cluster in India with about 300 medium and large enterprises mainly composed of chemical companies. About 40 participants from the members of Vapi Industries Association attended the workshop. The workshop commenced with an inaugural speech by Mr. Prakash Bhadra, President, Vapi Industries Association, followed by remarks from Mr. Toshizo Maeda, Programme Director, IGES Kansai Research Centre, Mr. Girish Sethi, Senior Director, TERI, and Mr. Ketan Kakkad, Senior Consultant, Gujarat Industrial and Technical Consultancy Organization Limited (GITCO).

The workshop was organised to create awareness about the energy efficiency of steam management and compressed air system. Experts from TLV Japan and TLV India, Mr. Takaharu Nakashima and Mr. Ashwin Sanyal, respectively, gave a presentation on steam management. Mr. Rakesh Pandita from Kobelco Air Compressors India and Mr. Hitesh Vaishnav from Vintage Air Technology presented on the compressed air system. In the Q&A session, participants asked the reasons for steam trap failure and ways to detect early leakage in steam traps as well as impacts of high summer temperatures and the variations between safety standards in Japan and India on compressed air systems. The post-training feedback survey showed that more than 80% of the participants became familiar with the energy efficiency of both technologies. Additionally, the workshop contributed to identify potential end-users willing to implement these technologies.
The workshop was a part of a business trip to India which included other activities such as walk-through survey of the steam processes in textile and pulp and paper companies near Vapi and feasibility studies of compressed air systems in Gurgaon, Haryana and refrigeration systems at Nellore and Ongole in Andhra Pradesh. 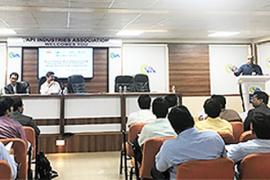 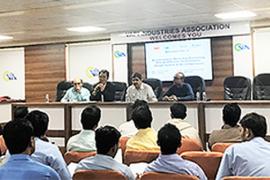 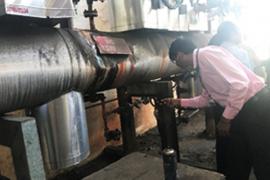