Mandalay City achieved a major milestone in January 2018 with the official launch of its Waste Management Strategy and Action Plan (2017-2030). Prepared with technical assistance from the IGES Centre Collaborating with UNEP on Environmental Technologies (CCET), the document is the first of its kind for the city, providing policy, strategic directions and practical guidance for managing waste in an integrated and sustainable (environmentally friendly, economically viable, socially acceptable) manner. Marking this important occasion, a formal initiation ceremony was held on 15 January at Mandalay City Development Committee (MCDC) Hall, which included speeches from the Chief Minister of the Mandalay Region and the Director of CCET, as well as the official handing over of the strategy to the Mayor of Mandalay. The event featured the participation of over 300 representatives from citizen organisations, local environmental groups and academia, among other civil society stakeholders, together with public and private sector actors, including women’s’ leaders and national and city government officials.

Working closely with CCET, Mandalay City’s waste management strategy and action plan was developed through an inclusive and consultative process that included a series of baseline studies, stakeholder workshops and technical drafting meetings conducted over the period of 2016-2017. This approach was on display at the 15 January launching event: in addition to being presided over by the Mayor of Mandalay City, the meeting also hosted a panel discussion on the strategy and its implementation between the Ministry of Natural Resources and Environmental Conservation (MONREC), MCDC, community representatives, as well as CCET. In line with the strategy and action plan, panellists highlighted the importance of proper waste collection, disposal and application of 3R (reduce, reuse and recycle) principles, emphasising the need for behaviour change -- mobilising the interest, resources and capacity of a range of different stakeholders —for the effective delivery of sustainable waste management.

Mandalay’s Waste Management Strategy and Action Plan is part of a larger programme of work supported by CCET in Myanmar, which since 2015 has also included the development of the country’s National Waste Management Strategy and Action Plan, currently in the final stage of official approval and set for completion by March 2018. Both strategies were presented at a Joint Workshop on Waste Management on 16 January held during Japan - Myanmar Environment Week in Myanmar’s capital city of Nay Pyi Taw, which was attended by MONREC’s Union Minister, the State Minister of the Ministry of Environment, Japan (MOEJ), as well as a number of other high-level participants.

In addition to Myanmar, CCET is now also providing technical assistance to the countries of Cambodia and Maldives towards the development of sustainable waste management strategies t the national, regional and city levels. For more information,
please visit: https://www.ccet.jp/ 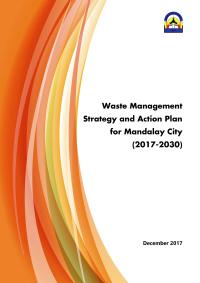