This year, the Group of Seven (G7) Summit in June and Group of Twenty (G20) Summit in October will be convened in Elmau, Germany and Bali, Indonesia, respectively. With the strengthening of interdependence between countries around the world and the shifting balance of power, the role and responsibilities of the G7, a small club of advanced economies, are being called into question. With local challenges quickly developing into global ones, the role of the G20 - a diverse group of countries, often with conflicting interests - is becoming more significant. This year, the war in Ukraine poses an additional challenge to the ongoing negotiations and discussions.
On this special webpage, IGES researchers will highlight and identify priority issues related to the environment and climate, as discussed at the G7/G20.

Similar to last year, the G7 Environment Ministers’ Meeting this year treated climate, energy, and environmental issues as a single track (G7 Climate and Environment Track). This structure is based on the recognition that, since the climate and biodiversity crises are closely interlinked, integrated solutions are necessary.

The main outcomes of the “Summit” convened among the member countries’ leaders include the Leaders’ Statement or Communiqué, as well as a set of communiqués at the ministerial level.

The full schedule for the G7 Ministerial Meetings can be accessed here.

The Increasing role of engagement groups

In addition to the Summit and Ministerial Meetings, the G7 also has a mechanism to collate various inputs from seven official engagement groups independent from the G7: T7 (Think 7; think tanks), Y7 (Youth 7), W7 (Women 7), S7 (Science 7; scientists), L7 (Labour 7; labour unions), C7 (Civil Society 7), B7 (Business 7; business federations). Inputs from each of these groups (delivered as statements or communiqués) are reflected to a great extent at the Summits and Ministerial Meetings (for more information on the role of G7/G20 engagement groups, please access this publication). The role of engagement groups to take actions independent from the public sector for climate change mitigation, the achievement of each of the Sustainable Development Goals (SDGs), and widespread societal change is becoming increasingly recognised.

At the G7 in 2022, the G7 planned dialogues with the seven aforementioned engagement groups deemed especially critical for the German Presidency. In addition to the seven engagement groups, other groups – cities, for example – was deeply relevant to the five themes set by this year’s G7 (1. Sustainable planet, 2. Economic stability and transformation, 3. Healthy lives, 4. Investment in a better future, 5. Stronger together). In light of the widespread recognition of the critical role that cities will play for the achievement of the SDGs, decarbonisation and other modern challenges in recent years, an unofficial engagement group for cities Urban 7 (U7) and Urban 20 (U20) were established. The U7/U20 are moving to provide cross-cutting inputs to the G7/G20. Members of the U7 – sustainable cities and local government councils – are collating good practices with the support of the German government. From Japan, the Designated City Mayors’ Association represented Japanese cities in the U7 discussions.

The frequent meetings online and in person convened among G7 Leaders in light of the situation in Ukraine differ from the aforementioned “Summit”; they were extraordinary meetings called on by the German G7 Presidency. The threats to energy security and increase in demand for coal and oil as alternatives to gas have raised concerns that the world will be derailed from the path toward achieving the climate targets, thereby prompting the convening of an extraordinary G7 Energy Ministers’ Meeting on 10 March 2022. Stressing the importance of energy self-sufficiency from the energy security perspective, the Ministers agreed to further accelerate transitions toward clean energy. Moreover, reaffirming their commitment to the Glasgow Climate Pact (“to pursue efforts to limit the temperature increase to 1.5 °C above pre-industrial levels”), the G7’s position in light of the global situation received public attention.

The German Scholz coalition government leading this consensus-building has, since its inauguration, declared to phase out domestic coal by 2030 and accelerate the uptake of renewable energy. The German government considers this energy transition and innovation as key drivers for German economic growth. Given strengthened calls for energy security and energy self-sufficiency in light of the situation in Ukraine, Germany’s ability to position the current energy crisis as an opportunity to shift to a decarbonised energy system based on renewable energy and further accelerate concrete actions to address climate change was tested. Japan, the G7 Presidency for 2023, will be able to strengthen the agenda, but not weaken them; therefore, the process in 2022 under the German Presidency is likely to form the basis of the future leadership of the Japanese Presidency in 2023.

As the G7’s top priority this year, German Prime Minister Olaf Scholz announced the establishment of a “Climate Club”, which aims to call for unity in widespread decarbonisation in the G7 as a means to promote the implementation of the Paris Agreement. The trends in “Climate Club” can be traced through the publicly available drafts of the policy briefs submitted by the Think 7 (T7; think tanks), one of the engagement groups to the G7. The T7 has created various task forces, such as “Climate and environment” and “Global Health”, whose policy briefs will feed into the T7 communiqué. Check the status of Climate Club in the G7 Leaders’ Communiqué.

The Climate, Energy, and Environment Ministers’ Meeting (25-27 May)

The Climate, Energy, and Environment Ministers’ Meeting to be held on 25 – 27 May was a critical point for environmental issues in this year’s G7 process. The G7 “Bologna Roadmap”, which promotes collective action regarding resource efficiency, is set to end in 2022. The negotiation of its successor was another key issue to watch.

Moreover, at the Resumed Fifth Session of the United Nations Environment Assembly (UNEA-5.2) in March, the establishment of an International Negotiating Committee (INC) toward a legally binding treaty to end plastic pollution was agreed on, based on resolutions by Japan, Peru, Rwanda, and India. Asia is both a hotspot of plastic pollution and a major source of marine plastic litter. Japan is expected to take leadership on this issue next year, as the only Asian country in the G7 and the 2023 G7 Presidency.

The G20 Summit in 2022 is planned to be held on 15 – 16 November in Bali, Indonesia under the Indonesian Presidency. The G20 stands for “Group of Twenty”, and includes, in addition to all G7 Members and the EU, membership from Argentina, Australia, Brazil, the People’s Republic of China, India, Indonesia, Republic of Korea, Mexico, Russia, Saudi Arabia, South Africa, and Turkey.

Climate and environment issues in G20

The G20 was formed in 1999 when G20 Finance Ministers and Central Bank Governors convened a meeting to address the 1997 Asian financial crisis. In response to the 2008 financial crisis, the Finance Ministers and Central Bank Governors Meeting was upgraded to the summit level. In recent years, the G20 tackles a wide range of global issues such as climate and energy, digitalisation, anti-terrorism, migration and forced displacement through multiple relevant ministerial meetings. For example, as the 2019 G20 Presidency, Japan convened the “Ministerial Meeting on Energy Transitions and Global Environment for Sustainable Growth”, which was the first time the G20 Energy Ministers and Environment Ministers met in one place. This practice has since been taken up by succeeding Presidencies.

Similar to the G7, the main outcomes of the Summit convened among the member countries’ leaders include the Leaders’ Statement or Communiqué, as well as a set of ministerial communiqués.

(For more information on the role of G7/G20 engagement groups, please access this publication.)

The coherence between the G20 and the G7

The coherence between the G20 and the G7 has been long sought after. For the first time in 2021 under the Italian Presidency, the G20 agreed on a Joint G20 Energy-Climate Ministerial Communiqué. The fact that the 2021 G20 Summit, convened shortly before the UNFCCC COP26, bolstered the momentum toward COP26 can be seen as a significant step forward. (Please see this page for more details on the results of the G20 Energy and Climate Ministers’ Meeting in 2021.)

The Global Solutions Summit 2022 was convened in March based on policy recommendations of the T20, one of the G20 engagement groups. As a bridge between G7 and G20, the event shared the priorities of the G7 and G20 Presidencies. The T20 communiqué, set to be released in September, will be based on the various policy briefs developed by the respective task forces. The T20 communiqué will likely then be reflected in some form in the G20 Leaders’ Communiqué.

Indonesia, which serves as the G20 Presidency this year and the only ASEAN member represented in the G20, has begun making progress on decarbonisation, declaring to achieve carbon neutrality by 2060 last year at COP26 and announcing the introduction of carbon taxes in July 2022. Under the G20 theme of “Recover Together, Recover Stronger”, the Presidency has set three main pillars relevant to the global economic recovery from COVID-19: “global health architecture”, “digital transformation”, and “renewable energy transitions”. Here, how the Indonesian Presidency will contribute to the G20 economy and how this framing will be used to support the Global South are seen to be important. Cooperation between the G7 and the G20 has been stressed at many opportunities. At the Global Solutions Summit 2022 in March, the G7 German Presidency stated that the G7 will commit to pioneering actions to repair the world’s health system, including the prevention and control of pandemics, in addition to working with the G20 to help the global economy recover from the pandemic.

Russia, a G20 member, was initially part of the then-G8 (Group of Eight), but was since removed from membership in 2014 after its annexation of Crimea. With regard to the ongoing situation in Ukraine, some members of the G20 – including the Indonesian Presidency – are reluctant to remove Russia from the G20. As discussions progress, how will the Indonesian Presidency smooth the cracks starting to form between the G20 member countries? The way these discussions will unfold may influence how the 2023 Presidencies of Japan (G7) and India (G20) will respectively set their agendas.

The Plenary G20 Environment Deputies Meeting and Climate Sustainability Working Group meetings ended on 23 March. There will be additional meetings in June and August, and the outcomes of this recent meeting are expected to be reflected in the communiqué drafting process. This year’s G20 Environment Ministers’ Meeting will focus on seven key priorities: land degradation, biodiversity loss, marine litter, water, sustainable consumption and resource circularity, sustainable finance, and ocean conservation. Moreover, the Climate Sustainability Working Group will discuss how to strengthen climate mitigation and climate adaptation, based on the outcomes of the UNFCCC COP26 convened in Glasgow, UK in 2021. In particular, there is great emphasis placed on the relationship between the oceans and climate change, as well as the mobilization of resources (funds, research, technologies, capacity building). 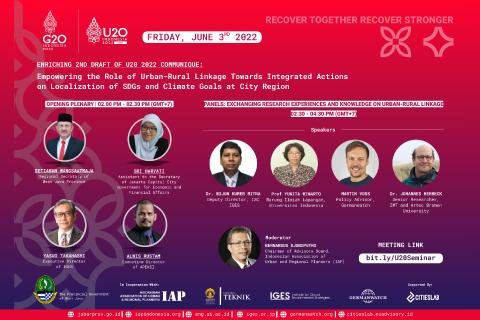 The world has been suffering from a pandemic since 2019. The Covid-19 pandemic brings us into a global economic crisis. It also impacts every aspect of society, including urban health, education, and international trade. Urban-20 (U-20), as an offici 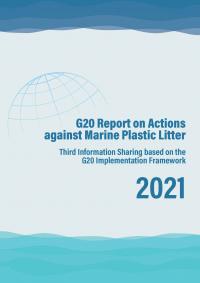 This report is the third compilation report on policies and measures with regards to marine plastics litter taken / to be taken by the participating countries, regions and organizations. This comprehensive report was produced under the responsibility of the Ministry of Ecological Transition, Government of Italy, with the support of the Ministry of... 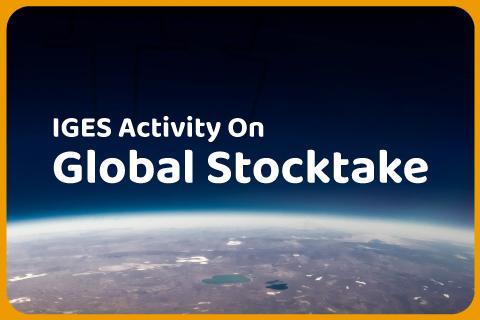 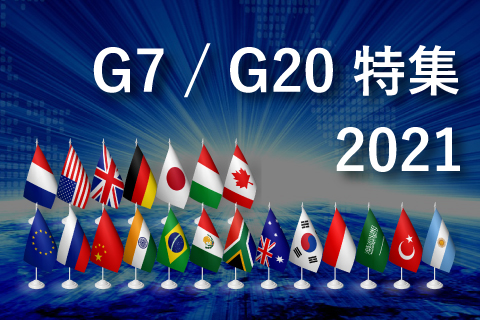 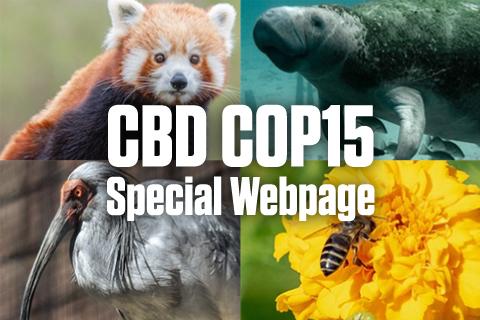