Completed a master's degree at the Department of Electrical Engineering, Graduate School of Engineering, Osaka University (Doctor of Engineering). He has served as a professor at Osaka University, a professor at Setsunan University, a president of Himeji Institute of Technology, and a vice president of the University of Hyogo (currently an emeritus professor at Osaka University). Appointed Director of Kansai Center since 2006. He also serves as chairman of the Hyogo Prefectural Environmental Council, a member of the Hyogo Environmental Advancement Association (public foundation), and a chairman of the Advisory Committee on Science and Technology of the Research Institute of Innovative Technology for the Earth.

Results 1 to 10 of 14 (Sorted by date)
Commissioned Report 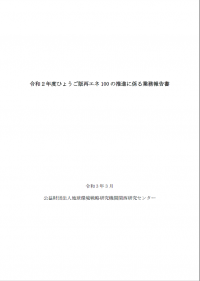