Based on the Paris Agreement’s enhanced transparency framework (ETF), countries regularly provide information on their progress with national climate actions. IGES supports full implementation of the ETF by all countries, especially in Asia. This webpage introduces IGES activities on ETF, such as the Mutual Learning Program for Enhanced Transparency (MLP), among other capacity building activities, and also links to relevant research papers and databases.

Enhanced Transparency of Actions and Support

In the Paris Agreement, all countries need to report information on their progress in undertaking climate actions and providing and receiving support for those actions through biennial transparency reports (BTRs). These arrangements for reporting are “enhanced” from existing arrangements and set out under the Paris Agreement’s enhanced transparency framework (ETF) (Article 13).

The transparency of information that countries provide through BTRs is fundamental to understand the implementation and achievement of national climate actions, known as the nationally determined contributions (NDCs) and global collective efforts towards meeting long-term goals. It can also serve as the basis for countries to identify additional actions and support needed for implementing the NDCs.

To ensure the effective implementation of the ETF and given that its implementation is challenging for some developing countries in the region, we focus on the following three areas:

The Mutual Learning Program for Enhanced Transparency (MLP) is for pairs of countries and organizations to learn and practice reporting of climate actions, based on each other’s reporting exercises. The output of the MLP can be used as the basis for actual reporting on the Paris Agreement’s ETF. The MLP is for those who directly engage with preparation of BTRs and is particularly useful in understanding the application of the ETF implementation rules to develop reporting based on national data and assumptions. Participants of the MLP can decide which topic to focus on depending on countries’ interests. We have so far implemented the MLP on Article 6.2 reporting and mitigation actions and measures in specific sectors.

IGES supports the implementation of the MLP as the secretariat in cooperation with MURC and other organizations. MLP is financially supported by the Ministry of the Environment, Japan.

Overview of the MLP

The MLP consists of three meetings and two exercises between those meetings. During the seven months of program implementation, we support participants to actively engage with continuous discussions and knowledge sharing. The key findings of the MLP are also shared at the Asian Transparency Workshop. 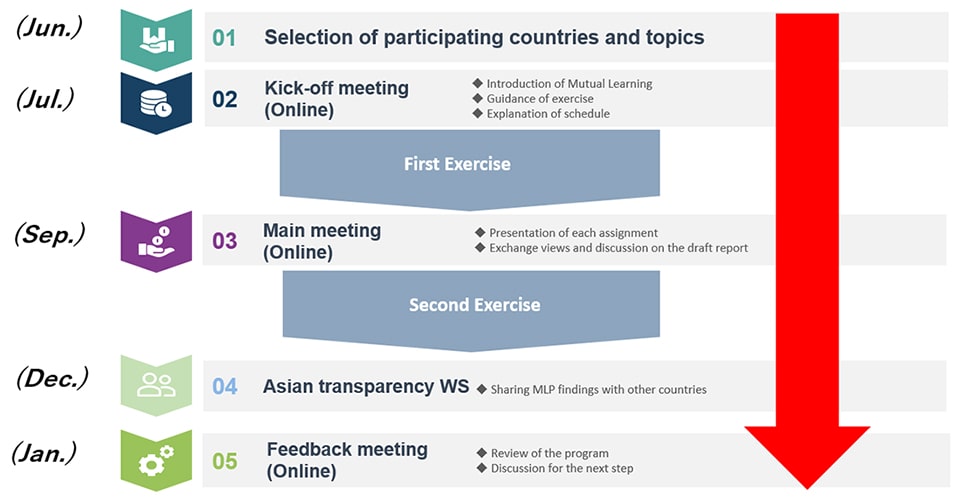 The Asian Transparency Workshop (ATW) aims to promote knowledge sharing among countries in Asia for the effective implementation of the Paris Agreement’s Enhanced Transparency Framework (ETF). It is jointly organized by the Ministry of the Environment, Japan (MOEJ), IGES, the UNFCCC-RCC and other partner organizations. IGES also supports the implementation of additional regional or international workshops to promote synergies among on-going support initiatives.

The IGES Biennial Update Report (BUR) Database provides key information reported in biennial update reports (BURs) submitted by Non-Annex I Countries to the UNFCCC. According to UNFCCC COP decision 2/CP.17, non-Annex I Parties, consistent with their capabilities and the level of support provided for reporting, should submit their first BUR by December 2014; the least developed country Parties and small island developing States may submit biennial update reports at their discretion. According to the decision, a BUR provides an update to the most recently submitted national communication in various areas including a national GHG inventory, information on national circumstances and institutional arrangements, mitigation actions and their effects, constraints and gaps, related financial, technical and capacity needs, support received, and domestic measurement reporting and verification. 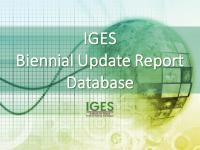 IGES Biennial Update Report (BUR) Database provides key information reported in biennial update reports (BURs) submitted by Non-Annex I Countries to the UNFCCC. According to UNFCCC COP decision 2/CP.17, non-Annex I Parties, consistent with their capabilities and the level of support provided for reporting, should submit their first BUR by December... 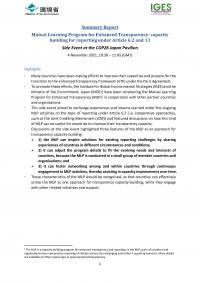 Capacity building for transparency and reporting: sharing experiences from the Asia-Pacific region
Data or Tool

Panel session: “Capacity building for transparency and reporting: sharing experiences from the Asia-Pacific region and beyond”
Discussion Paper 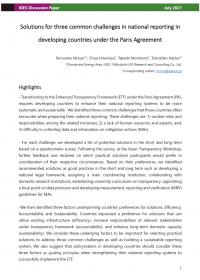 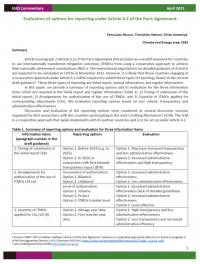 Evaluation of options for reporting under Article 6.2 of the Paris Agreement
Discussion Paper 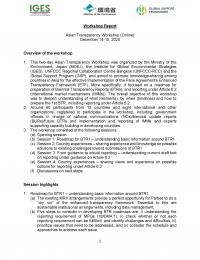