Applying Circulating and Ecological Sphere (CES) Concept for Placing Urban Rural Linkages at the Core of Localization of Climate and Sustainable Development Actions.

The ambitions expressed in the UN2030 Agenda and its Sustainable Development Goals, the Paris Climate Agreement, and the Sendai Framework for Disaster Risk Reduction underscores the urgency with which societies need to transform towards a more livable, just and ecologically sustainable future. Achieving the plethora of Sustainable Development Goals, targets and indicators is ambitious, and achieving them with business as usual will not be possible. Therefore, achieving greater societal sustainability and resilience requires new approaches to integrating diverse policies and actions around social, cultural, economic and environmental/ecological dimensions. The Circulating and Ecological Sphere (CES) approach encompasses spatial integration of urban/peri-urban/rural interdependencies to address complex social, environmental and economic sustainability challenges together. The CES concept is designed to maximize the unique strengths of urban-rural linkages in all regions through sustainable, equitable, and efficient use of natural capital in rural environments combined with productive capital in cities in an integrated manner, leading to synergistic relationships with each other toward a sustainable and resilient regional sphere.

The proposed side event will invite speakers from the national government, local governments, international development agencies, academia and research institutes both from Japan and overseas, and provides a platform to exchange views on importance of integrated actions for localization of global and national goals and targets and how the CES concept strengthen the urban rural linkages by showcasing selected good practices. The side event will also provide opportunity discuss issues, challenges and opportunities to apply the CES concept in the context of Asian city region. 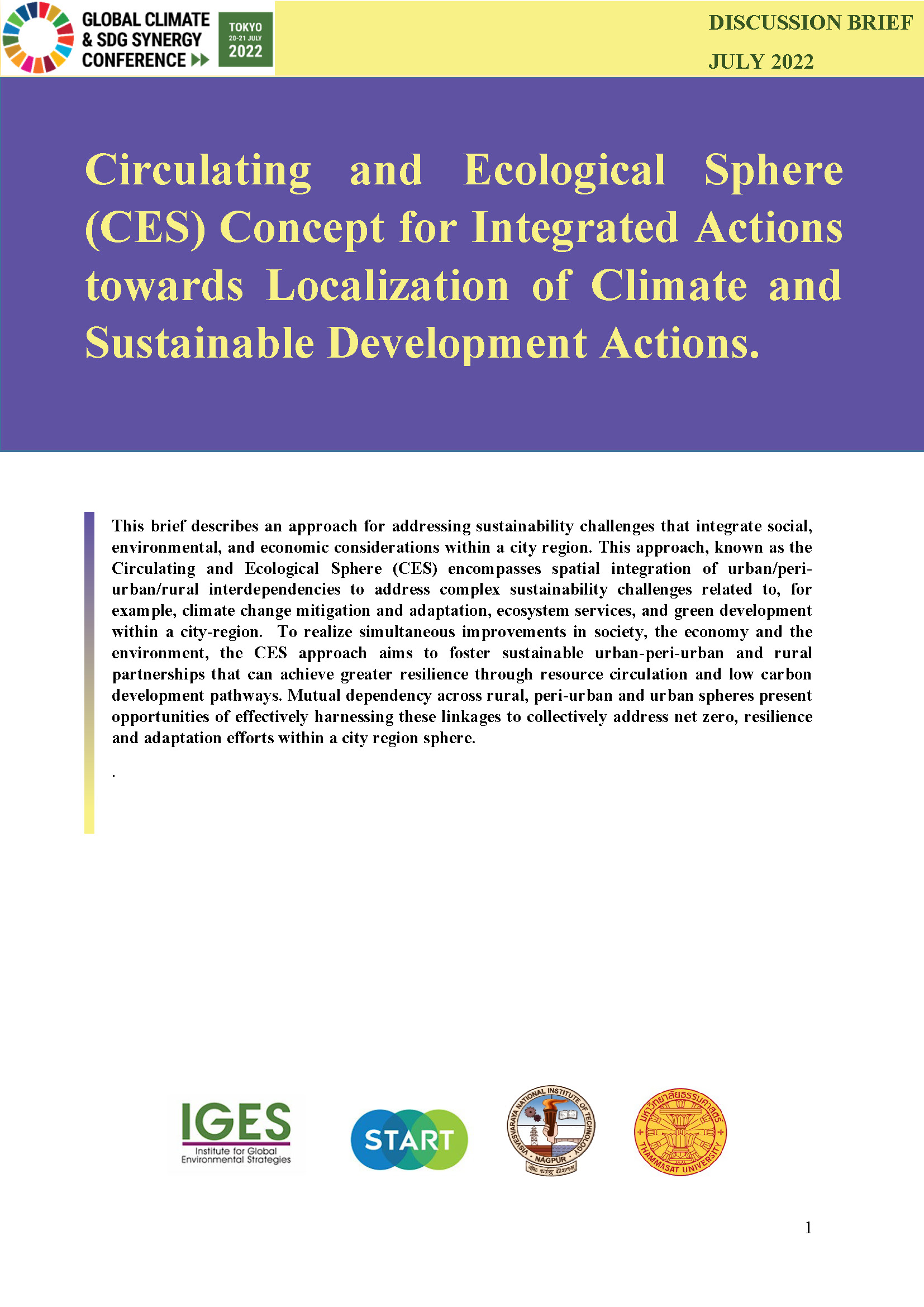 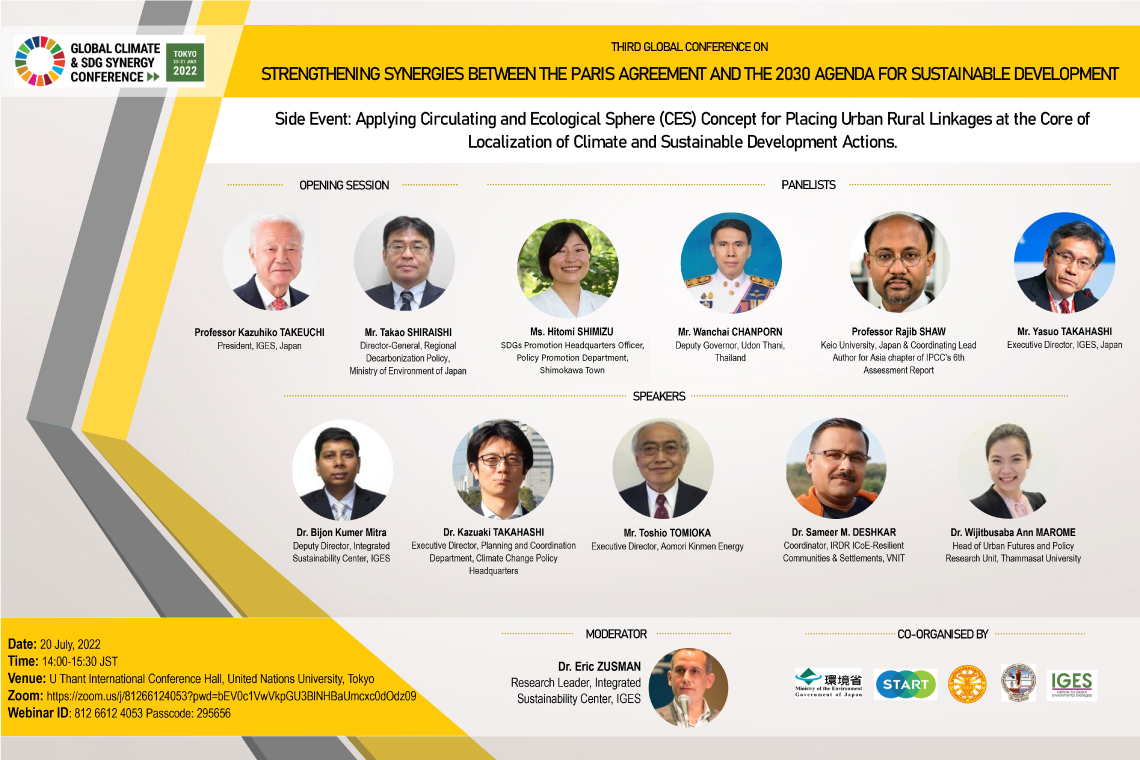 Kazuhiko TAKEUCHI
Professor Kazuhiko TAKEUCHI is the President of Institute for Global Environmental Strategies. He held several high-level positions. In 2019, he took up the position as Project Professor of the Institute for Future Initiatives (IFI) at the University of Tokyo. He has served, inter alia, as Acting Chair of the Central Environmental Council, Government of Japan, Editor-in-Chief of “Sustainability Science” (Springer Nature) and Distinguished Chair, Wangari Maathai Institute for Peace and Environmental Studies, University of Nairobi. He specializes in landscape ecology, environmental studies and sustainability science. He obtained M.Agr. and Ph.D. from the Graduate School of Agriculture, the University of Tokyo.

Takao SHIRAISHI
Mr Takao SHIRAISHI is the Director-General for Regional Decarbonization Policy, Ministry of Environment of Japan. He Graduated from WASEDA University, Faculty of Political Science and Economics.

Kazuaki TAKAHASHI
Dr Kazuaki TAKAHASHI is the Executive Director for Planning and Coordination Department, Climate Change Policy Headquarters, Yokohama City. Dr Takahashi joined the Ministry of the Environment in 1998. He has served for more than 20 years in various roles in the Ministry, including the Environmental Health Department's Office of Mercury Management, where he worked on chemical management and mercury management based on the Minamata Convention on Mercury. He was also involved in the interim storage of soil and waste generated from decontamination works at the Fukushima Regional Environment Office, as well as aquatic environment conservation at the Water Environment Division, a branch of the Environment Management Bureau. He was the Director of the Climate Change Adaptation Office, a branch of the Global Environment Bureau. Since 2021, he has been the Executive Director for Planning and Coordination Department of Climate Change Policy Headquarters, City of Yokohama. He holds a Doctor of Philosophy (Engineering) from Kyoto University.

Rajib SHAW
Mr Rajib SHAW is a professor in the Graduate School of Media and Governance in Keio University, Japan. He is also the Senior Fellow of Institute of Global Environmental Strategies (IGES) Japan, and the Chairperson of SEEDS Asia and CWS Japan, two Japanese NGOs. He is also co-founder of a Delhi (India) based social entrepreneur startup Resilience Innovation Knowledge Academy (RIKA). His expertise includes disaster governance, community-based disaster risk management, climate change adaptation, urban risk management, and disaster and environmental education. Professor Shaw is the Co-chair of the Asia Pacific Science Technology Academic Advisory Group (APSTAAG). He is also the CLA (Coordinating Lead Author) for Asia chapter of IPCC’s 6th Assessment Report. He is the editor-in-chief of the Elsevier’s journal “Progress in Disaster Science”, and series editor of a Springer book series on disaster risk reduction.

Hitomi SHIMIZU
Ms Hitomi SHIMIZU  is a government official of Shimokawa Town. As former SDGs ambassador, not only has she made "Shimokawa SDGs Map" for SDGs localization but has vigorously invited citizens to take action on achieving the SDGs to make a more sustainable town, taking a bottom-up approach. From the academic field, she received her B.S./M.S. at Keio University, interested in the localization of SDGs and international policy. Shimokawa town being one of the leading municipalities in Japan, and currently the only town in the world to have published the VLRs, she strives to further emphasize the role of small-scaled municipalities so that no municipality will be left behind. Hitomi is also joint representative of SDGs-SWY, inviting youth to take action on the SDGs.

Toshio TOMIOKA
Mr Toshio TOMIOKA is the representative Director of Aomori Kenmin Energy Inc. He has been involved in the citizen windmill business in Aomori Prefecture, and has been developed and operated a solar power generation business. He launched an electricity retail company (Aomori Kenmin Energy Inc.) under the motto of "self-production for self-consumption" in addition to the renewable energy power generation business. The parent company, Mirai Energy Holdings Inc., is a non-profit type corporation that does not distribute profits to shareholders but reinvests them in new renewable energy projects. He believes that Commons (local resources) belong to the community, and is seeking to enrich the community through joint management, joint use, and joint profit of the commons.

Sameer M DESHKAR
Dr Sammer M DESHKAR is an Architect and Environmental Planner and is specialised in resilient city planning. Currently he serves as Associated Professor at Visvesvaraya National Institute of Technology (VNIT), Nagpur, INDIA. He has extended research supervision to over 25 postgraduate students in Urban Planning. Dr Deshkar spent his initial years of research career at Nagoya University, Nagoya, Japan as a MEXT fellow during years 2009-2011. He has published over 20 journal papers, book chapters & peer reviewed conference proceedings. He has also undertaken several research projects under prestigious funding programmes such as BRICS-STI framework and ICSSR-JSPS bilateral international programme.

Eric ZUSMAN
Dr Eric ZUSMAN is a senior policy researcher/area leader at the Institute for Global Environmental Strategies in Hayama, Japan. Dr. Zusman holds a bachelors degree in Mandarin Chinese from Rutgers University, a dual Masters Degree in public policy and Asian studies from the University of Texas at Austin and a Ph.D. in political science from the University of California, Los Angeles. For much of the past two decades he has conducted research on environmental issues in Asia. This has included working with China’s Yellow River Conservancy Commission, the Chinese Research Academy on Environmental Science, Woodrow Wilson Center’s China Environment Forum as well as Taiwan’s Academia Sinica.