As part of the activities under Japan-India Technology Matchmaking Platform (JITMAP), IGES-KRC invited delegates from The Energy and Resources Institute (TERI) and Gujarat Industrial and Technical Consultancy Organization Limited (GITCO) in India, to conduct a site visit to the location of an electric heat pump (EHP), Japan's low carbon technology (LCT). Delegates also interacted with Japanese manufacturing companies, and local government officials in Hyogo Prefectural Government, Japan on 17 and 18 of July 2018.
On 17 July the delegates visited the Hyogo Prefectural Museum of Art, where the electric heat pump (EHP) technology manufactured by Mayekawa MFG. Co., Ltd. has been installed for more than 17 years. The key objective of this visit was to enhance their awareness about application of EHPs in public buildings besides industries. The delegates were impressed with the performance and long lifecycle of the EHPs. It was also an opportunity for them to clarify various technical issues related to EHP.
Following the visit for to the EHP, they visited TLV International, Inc. in Kakogawa city to interact with TLV’s experts and learn more about Steam System Optimization Programme (SSOP). Following a factory visit, IGES, TERI, and GITCO discussed with TLV about potential sectors and areas to introduce the SSOP in India.
On 18th July, the delegates had two meetings with Hyogo Prefectural Government. The first meeting was dedicated to exchange information with Mr. Akiyama, Chief Executive Officer for Environment, as well as with officials from the Environment Development and Management Bureau. At the second meeting, the delegates held discussions with officials from the Environmental Policy Division, Water & Air Quality Control Division, and International Economic Development Division, about potential activities to catalyse the ‘Memorandum of Understanding between the Hyogo Prefectural Government, Japan and the State Government of Gujarat, Republic of India on Mutual Cooperation’ signed between Hyogo prefectural Government in Japan and the State government of Gujarat in India.
The visit to industrial sites, meetings in person with the technology valuable and dialogue with Hyogo prefectural government were appreciated by the Indian delegates as well as their Japanese counterparts as precious opportunities to obtain reference points and create a network for their future activities through direct interaction and understanding of the current situation under the JITMAP. 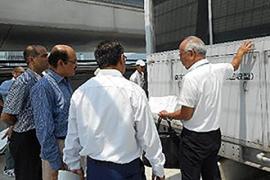 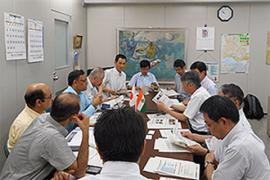 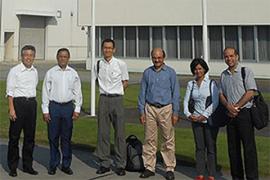