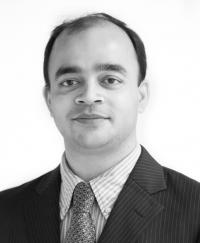 Dr. Pankaj Kumar joined IGES since April 2018 as senior policy researcher in the field of water resources and climate change adaptation. Prior to this, he worked as JSPS/UNU-IAS postdoctoral fellow in United Nations University, Institute for Advanced Study of Sustainability (UNU-IAS), Tokyo; for more than three years. Recently his research work focused on ‘Water quality assessments and scenario modeling for clean urban water environment in South-East Asian developing cities’ a transdisciplinary work; which aim to enhance community resilience to address growing water demands under rapid global changes (population growth, climate change, and urbanization), with ultimate intention to give a solution for sustainable water resource management at policy level. Right after completing his doctoral research, he also worked as assistant professor for two years in ISTAR, Gujarat, India. He holds doctoral degree majored in Geo-Environmental Science from University of Tsukuba, Japan. In parallel, he had work experience as Chapter Scientist for the Fifth Assessment Report (AR5) of the Intergovernmental Panel on Climate Change (IPCC). He was mainly associated with the IPCC’s Working Group-II report that focuses on “Impacts, Adaptation, and Vulnerability” which was released in December 2014. Also, he worked/is working for nexus assessment of the interlinkages among biodiversity, water, food and health in the context of climate change under Intergovernmental Science-Policy Platform on Biodiversity and Ecosystem Services (IPBES) secretariat as scoping expert as well as lead author respectively. He has numerous research publications including one authored book, several peer reviewed journal articles, book chapters of international repute, and a monograph to his credit. 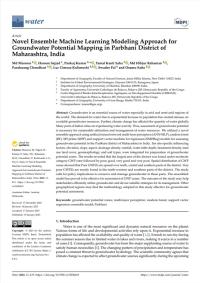 Groundwater is an essential source of water especially in arid and semi-arid regions of the world. The demand for water due to exponential increase in population has created stresses on available groundwater resources. Further, climate change has affected the quantity of water globally. Many parts of Indian cities are experiencing water scarcity... 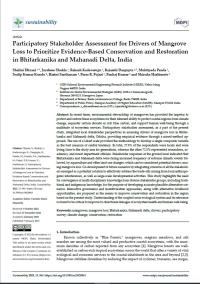 Participatory Stakeholder Assessment for Drivers of Mangrove Loss to Prioritize Evidence-Based Conservation and Restoration in Bhitarkanika and Mahanadi Delta, India

In recent times, environmental stewardship of mangroves has provided the impetus to
protect and restore these ecosystems for their inherent ability to protect coastal regions from climate
change, sequester carbon dioxide as rich blue carbon, and support human well-being through a
multitude of ecosystem services. Participatory stakeholder... 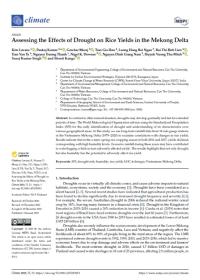 In contrast to other natural disasters, droughts may develop gradually and last for extended periods of time. TheWorld Meteorological Organization advises using the Standardized Precipitation Index (SPI) for the early identification of drought and understanding of its characteristics over various geographical areas. In this study, we use long-term... 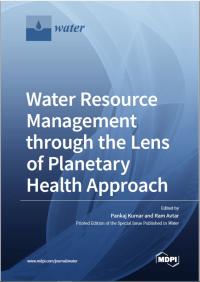 Water Resource Management through the Lens of Planetary Health Approach

For eternity, water resources have proven to be the key to inclusive social development and human well-being. However, the spatio-temporal variation of this finite resource over various landscapes makes it prone to misuse and mismanagement. Rapid global changes such as urbanization, population growth, socio-economic change, change in lifestyle... 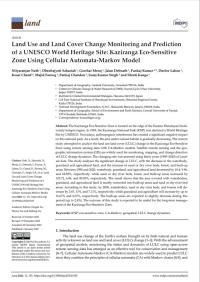 The Kaziranga Eco-Sensitive Zone is located on the edge of the Eastern Himalayan biodiversity
hotspot region. In 1985, the Kaziranga National Park (KNP) was declared a World Heritage
Site by UNESCO. Nowadays, anthropogenic interference has created a significant negative impact
on this national park. As a result, the area under natural habitat is... 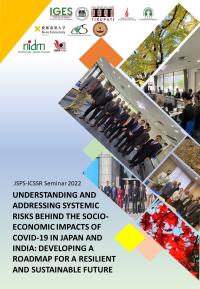 Understanding and Addressing Systemic Risks Behind the Socio-economic Impacts of COVID-19 in Japan and India: Developing a Roadmap for a Resilient and Sustainable Future

Understanding and Addressing Systemic Risks Behind the Socio-economic Impacts of COVID-19 in Japan and India: Developing a Roadmap for a Resilient and Sustainable Future
Author:
INSTITUTE FOR GLOBAL ENVIRONMENTAL STRATEGIES (IGES)
Indian Institute of Technology, Tirupati (IIT-T)

These proceedings pertain to the JSPS-ICSSR seminar entitled ‘Understanding and Addressing Systemic Risks Behind the Socio-economic Impacts of Novel Coronavirus Disease (COVID-19) in Japan and India: Developing a Roadmap for a Resilient and Sustainable Future’. Led by the Institute for Global Environmental Strategies (IGES) and the Indian Institute... 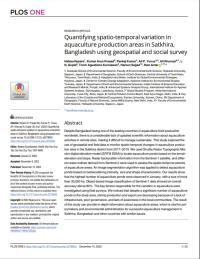 Despite Bangladesh being one of the leading countries in aquaculture food production
worldwide, there is a considerable lack of updated scientific information about aquaculture
activities in remote sites, making it difficult to manage sustainably. This study explored the
use of geospatial and field data to monitor spatio-temporal changes in...

Status of Air Pollution during COVID-19-Induced Lockdown in Delhi, India

To monitor the spread of the novel coronavirus (COVID-19), India, during the last week
of March 2020, imposed national restrictions on the movement of its citizens (lockdown). Although
India’s economy was shut down due to restrictions, the nation observed a sharp decline in particulate
matter (PM) concentrations. In recent years, Delhi has... 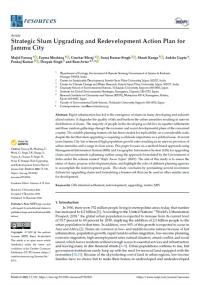 Rapid urbanization has led to the emergence of slums in many developing and industrialized
nations. It degrades the quality of life and burdens the urban amenities resulting in uneven
distribution of slums. The majority of people in the developing world live in squatter settlements
and these random gatherings disrupt the economic and social... 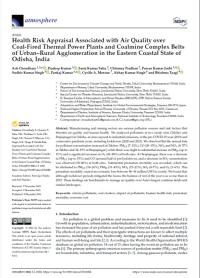 Manufacturing and mining sectors are serious pollution sources and risk factors that
threaten air quality and human health. We analyzed pollutants at two study sites (Talcher and
Brajrajnagar) in Odisha, an area exposed to industrial emissions, in the pre-COVID-19 year (2019) and
consecutive pandemic years, including lockdowns (2020 and 2021)...